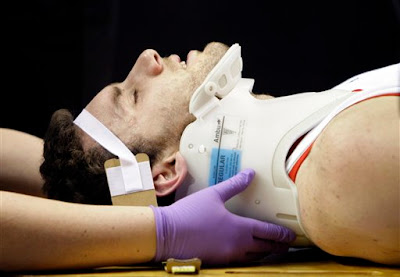 What you don't know about my fall

I'm writing this without a voice. It seems that I had something of a cold, and since the hit by Ariza, I'm completely hoarse. That's one of the things that hasn't been explained about the incident that I'm going to tell you about.

That night my Mother, Maite, had fallen asleep watching the game against the Lakers, and she opened her eyes right when Brandon Roy passed me the ball as I was running towards the hoop. My girlfriend, Cristina, turned on the TV and the first thing she saw was me on a stretcher. You can imagine what went through their minds. The first thing they did was call "El Chacho" (Sergio), but he'd changed his phone number so they couldn't get a hold of him. My agents were calling Portland, and the team was calling them. My grandparents were also very nervous. Luckily they found out right away that things were ok, but even when I spoke with my Mother and my Girlfriend they both wanted to get on the next plane to Portland.

Luckily Sergio was able to calm the waters, along with my six friends who are here from Malorca. They were able to talk to everyone in Spain and let them know that I'll be able to play on Sunday, and that I'm alright, it was just a big scare. Very big.

In the hospital I watched the game with Sergio. Every time I watch it I wonder how it is possible that nothing serious happened. When I was in the air I was thinking, "Where's the ground?" And the second I realized what had happened---Boom! The landing. It's amazing that I didn't hurt my left arm, especially since I'd hurt it a while ago in a Copa ULEB game. A few years ago I had a similar incident with Salva Guardia which made me a little dizzy, but nothing compared to this.

On TV you could see how long I was on the ground. The doctors were asking if I could feel my legs and arms, and I told them I was fine, but it was really hard to breath. That's why I was so worried. When they brought out the neck brace I told them it wasn't necessary, but they said that they had to put it on as a precaution.

To tell the truth, I feel proud of the fight that broke out after the incident with Ariza. Obviously it's good that no one got punched or anything, but it makes me feel like I'm covered. It really shows that my teammates have my back, and that we are a united team, even though I just laid there while the rest were pushing people around . . .

A lot of people called when I was in the hospital. It was amazing. One of the trainers from the team came to see me, but everyone called. Pau Gasol was really worried. Trevor Ariza sent an apology through Pau, which I'm thankful for. Of everyone who called, the one that really surprised me was Eduardo Portela, President of the ACB. I'm glad he called, and I want to thank him for doing so. 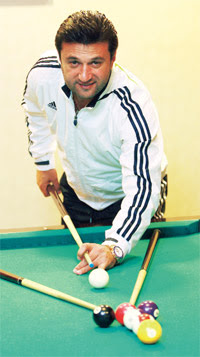 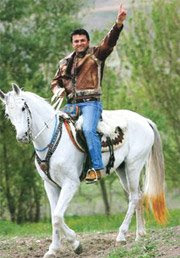