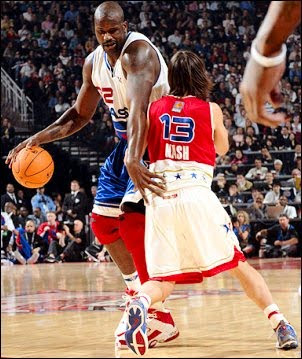 Shortly after O'Neal was traded to the Suns in February 2008, Nash mentioned to his new teammate a reality show he was pursuing. It would feature the Suns point guard taking on professional athletes in their own sport.

The topic didn't come up again until early in the 2008-09 season, when O'Neal boarded the Suns bus and told the team he would be starring in a new reality show in which he would be taking on, you got it, professional athletes in their own sport.

"You mean the idea you stole from me?" one Suns representative said he heard Nash say.

Nash eventually sought out an entertainment lawyer, according to sources, which is why he now has an executive-producer credit and the compensation that comes with it.

When reached Wednesday, Nash would not confirm the story.